The Big Four To Square-Off Once Again 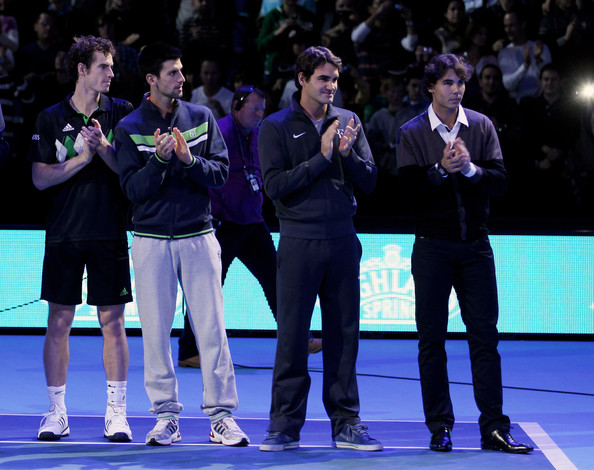 2011 has seen an unprecedented year at the slams from the big four. In the sixteen semi-final spots available this year, only two have been filled by players outside of that charmed square. And even those two were the result of Nadal injuring himself early in his Australian Open quarterfinal and Federer choking a two-set lead in his Wimbledon semifinal. The monopoly continues in Flushing Meadows.

We all know what happened the last time these two men met. That finger twirl from Roger after he took out Novak at the French Open wasn’t just elation at reaching the final of the French Open. He showed off because he knew that he had ended the Djokovic winning streak and killed the hype surrounding it, and he was so pleased with himself for doing so.

And it’s this that makes matches between these two so exciting; they’re not friends and nor do they pretend to be (*cough* Rafole). It’s not just a final of the US Open at stake when these two play. it’s also bragging rights. And with two grown, red-blooded men who openly dislike each other, that’s probably an even bigger motivation for both today.

Federer has been playing so well this fortnight, and just as people were almost beginning to hold Tsonga as the favourite after his two recent victories over the GOAT, Fed simply shook his head, flicked his hair, laughed, and then proceeded to dish a beatdown on Tsonga. Djokovic hasn’t been quite so good, with his play far too passive - particularly against Tipsarevic and Dolgopolov. But the Serb has become such an incredible big-match player this year, so expect that all to change today.

Three years ago, Andy Murray came of age as he defeated Rafael Nadal in this very round of the US Open in four sets. It was huge. So huge that I still vividly recall Mark Petchey’s triumphant “HE DID IT, HE’S IN THE FINAL!!!!1!” as the Scot put the final nail into Nadal’s 2008 US Open coffin. It seemed like Murray had finally arrived and even if he lost in the final, he had risen to Nadal’s level and the slams would soon follow.

Three years later, Nadal has immensely improved on all surfaces, finally conquring both hard court slams and doubling his Grand Slam tally with five more. Meanwhile Murray’s tally still stands at zero and his only big-time performance against a ‘big 4′ player in a slam came in his retirement vicory over Rafael Nadal in the quarters of Australia in 2010.

For those reasons, this match-up is advantage Nadal. After a slow start, he seems to be playing great this week, with the days of wetting his pants at the mere mention of Novak Djokovic’s name possibly over.

That’s not to say that Murray doesn’t have a chance though, and if he looks to get the first strike in and can keep his forehand together, opportunities will open up. But he’ll need to show so much more resilience and mental strength than at Wimbledon this year when he fell apart from a set and break up after only one bad point.