Grigor Dimitrov - When Style Is Mistaken For Substance

3 Comments Posted by footfaulter on January 8, 2013 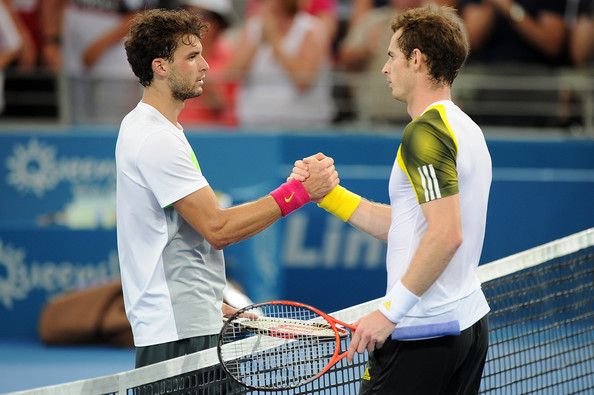 Fact. Regardless of the channel, country or tournament in question, Grigor Dimitrov‚Äôs tennis receives more love than most seasoned pros. Commentators bow to his image, comparing the Bulgarian to the greatest player of all time, essentially professing their undying love for his game whilst seemingly wanting nothing more than to take his forehand, backhand or serve out on a lavish date. This was certainly the case during last week‚Äôs Brisbane final, in which the Aussie commentators spent much of the contest adoringly narrating his every move - their eyes probably assuming the shape of hearts. During the final, one of the commentators even went as far as to say: “He‚Äôs a good looking player, and I say that because he does look good.” Well, nice to know.

I mention this because the hype, predictions and expectations placed upon him are essentially based on just that - his style and the superficial similarities to Federer‚Äôs game. It certainly isn‚Äôt his negative tour win-loss record or the fact that he is yet to grace even the third round of Grand Slam or win a title. One would expect the career of Richard Gasquet to serve as a cautionary tale towards those quick to launch the “Baby Federer” hype machine, but apparently those covering Grigor Dimitrov missed the memo. Instead, people are quick to falsely equate the style that Dimitrov‚Äôs tennis exudes with the actual substance and level required to reach the top echelons of the game.

Having said that, there was much to be impressed about from Dimitrov against Murray. The match itself was both engrossing and disappointing. On one hand, it featured entertaining, rapid all-court tennis. However, it was also frustrating in its utterly predictable mental collapse from the Bulgarian. He arrived on fire and looked to have the better of Murray until serving for the first set. Then, after a nervy collapse whilst leading 5-4 with a break, he briefly recovered only to fall apart in even more dramatic style in the tiebreak. The second set saw Murray‚Äôs level fall off the face of the earth, but once again Dimitrov squandered yet more chances and hammered the final nail to his coffin. It had the potential to be an entertaining and tight contest, but instead closer resembled a damp squib.

What impressed was the brand of tennis the 21 year-old exhibited. In the past, his athletic gifts and raw all-court style have shone brighter than any other aspect of his game, but Sunday made for completely different viewing as it was the finer aspects of his game that demanded attention. Most notable was his notoriously weak backhand. Murray unsurprisingly focused most of his attention to that wing early on, but rather than the backhand breaking down easily as usual and offering mostly ineffective slices and a weak spot for Murray to smother, Dimitrov responded by showcasing such impressive and improved variety on his backhand wing. He infused his driven backhand with powerful and flatter blows, weightier topspin, some loopier balls and the occasional angle. His slice too appeared a completely new stoke as he combined a variety of different types of slice - deep floating slices, more penetrating slices, and short and low slices with no pace. Rarely did the Bulgarian execute the same shot twice and this elaborate variety caught Murray off-balance, with the Scot unable to settle into any rhythm and forced to find solutions himself.

He also impressed with his instincts around the court. Court sense is generally an innate, natural talent and certainly an area in which Dimitrov has previously left much to be desired. But against Murray he approached the net at the correct moments and made sensible, logical decisions around the court. He also appeared especially observant of how Murray dealt with different aspects of his game. An example being in the first set when Murray began to struggle with short and low slices to his forehand. Dimitrov wasted no time in mercilessly exploiting that weakness with a slew of dropshots and no-pace low slices to Murray‚Äôs forehand side. In other words, he looks like he‚Äôs growing up and maturing before our eyes.

The question remains just what this maturity is and how far it will take him. Just a couple of days later he arrived in Sydney and shamelessly tanked the match away, quickly reminding us of exactly what we‚Äôre dealing with. Hype won‚Äôt reveal his true potential, but time will, and 2013 promises to be the year that tells us all we need to know about Grigor Dimitrov.

Like
Be the first to like this.
ATP, Australian Series, Grigor Dimitrov, Tactical Corner
← Way Back Wednesday: 10 Nostalgic Pictures. Just Because. Bernard Tomic: The Hall Of Famer →

3 Responses to Grigor Dimitrov - When Style Is Mistaken For Substance