From The Vault: The Drama Days 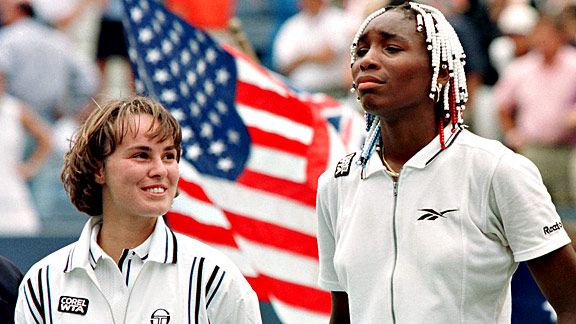 By its very definition, the off-season is supposed to signify end of tennis for another year and offer a well-earnt break for all in a sport that demands so much of both the players and fans who follow it. In reality, however, the tennis rages on in the form of “hit and giggle” exhibitions - wherein the top male and female players pocket often obscene sums of money to simply knock around the ball for an hour or two. This year, between Roger Federer’s grand tour of South America and other one-off events in cities such as Prague, Toronto, Miami, Antwerp, Singapore and many others, those “hit and giggle” exhibitions feel more prominent than ever.

It hasn’t always been laughter, however.

The year was 2000. At the time, the WTA was in a considerably different state to the tour today. Whilst the likes of Azarenka, Wozniacki, Kvitova and Radwanska today have been forced to obediently await the fall of the previous generation before ascending to the top, the young players of the late 90s and early 00s - Martina Hingis, Anna Kournikova, Venus Williams and Serena Williams - rapidly rose to prominence by brute force, demanding the spotlight both on and off the court and re-branding the image and core dynamics of women’s tennis in the process.

By the end of Y2K, Hingis held five Grand Slams and stood atop of the rankings for god-knows-how-many weeks, Kournikova was one of the most celebrated athletes in history, Venus had seized the previous two slams and two Olympic gold medals whilst embarking on an epic 35-match winning streak, and the legend of Serena was just unfolding. This caused friction both amongst themselves and also with the established jocks who rejected these youngsters who marched in with their over-confidence, trash talking, sex-appeal and glamour, demanding to be seen and respected.

Throughout this period, notable incidents involving these four and others mounted up; Hingis triumphantly flicked a signature Williams bead into the press crowd after defeating the elder Williams in the 1997 US Open final before declaring that she had no rivals, Serena famously brushed aside one of Hingis’ many putdowns by coyly suggesting that the Swiss champion “lacks formal education”, and long before they physically met on or off the court it was comments from a pre-teen Kournikova who sowed the first seeds of drama to come in the early 90s, as the press hyped up a Kournikova-Williams rivalry while she competed in a junior tournament at Rick Macci’s tennis academy in Delray Beach - the Williams Sisters’ old stomping grounds.

Lindsay Davenport often entered the fray too, branding Kournikova “a circus act” and allegedly kicking the bag of yet another controversial young upstart, Alexandra Stevenson, across the locker-room. During Venus’ extended hiatus in the first half of 2000 which spurred retirement rumours, Davenport’s sharp tongue lashed out at Williams with the quote to end all quotes: “Who knows what’s going on with that family? Serena is more friendly. At least she can bring herself to say hi. Venus can’t - or won’t - even speak. Venus likes to give the impression that she’s so great, that she’s ‘Da Bomb’, or whatever. She can say it all she wants but that just means she doesn’t have it. She gets psyched out in big matches, she’s not happy with her sister winning and the pressure is really falling on her.”

After Venus returned and claimed her first Grand Slam title barely a few months later at Wimbledon, Hingis cornered Davenport at the US Open ahead of her quarterfinal match against the younger Williams and demanded a victory. Davenport responded by expecting Hingis to reciprocate the deal and dispose of Venus, and thus the infamous anti-Williams pact was born. It made headline news and became embroiled in drama as Richard Williams had his own unsurprisingly controversial opinion on the pact. Davenport did indeed oust Serena, and Serena did little disguise her utter disgust as afterwards; “Obviously no one would want to see an all-Williams final because everyone doesn’t really like us. It’s going to happen in the future, inevitably. Nobody’s going to be able to stop it.” Venus was even more furious, but she publicly responded with humour, jokingly suggesting “It’s getting to be like the WWF.” And then she beat them both to take the title.

Nonetheless, the most dramatic incident occurred during the 2000 exhibition season. Despite forming a friendship and fruitful doubles partnership which secured the pair two Grand Slam titles and the top ranking spot in the same year, a November exhibition in Santiago, Chile between Hingis and Kournikova brought that friendship temporarily crashing down. After a questionable lines-call, Hingis asked Kournikova to intervene but the Russian sided with the original call. A fuming Hingis responded at the next change of ends as only Martina Hingis could, triumphantly shouting “Do you think you are the queen? Because I AM THE QUEEN!” Kournikova wept through the remaining games of the exhibition.

An hour-long locker room scream-fest between the pair followed as flowers, vases, trophies and insults were allegedly chucked across the room. The choice of weaponry being amusingly symbolic; Hingis craving the popularity, affection and flowers from admiring fans that were afforded to Kournikova, whilst the Russian wished for the trophies and success that had been effortlessly lapped up by Hingis. Event organizer and former pro Jaime Fillol didn’t even attempt to dampen the rumours surrounding the exhibition bust-up, instead hysterically claiming “It was so bad I thought they were going to beat each other up.”

What’s most interesting about these events is how much, despite the publicity these encounters generated and the fact that they would kill for this exposure today in 2012, the WTA openly discouraged it back then. They attempted to muzzle the Swiss Miss’ Everest-sized mouth by forcing her to attend PR training sessions and sometimes even resorted to quite ridiculous publicity stunts. Not least at the US Open in 1999 when they orchestrated a cringe-worthy public “truce” between Hingis and Richard Williams, which involved Hingis presenting Williams with a signed T-Shirt whilst reciting scripted lines. Mary Carillo summed it up best: “The WTA PR people cooked up this twisted and bizarre stunt. Hingis didn’t want to give this guy a T-shirt - she wanted to give him something else.”

Like
Be the first to like this.
Anna Kournikova, Martina Hingis, Serena Williams, Venus Williams, WTA, WTA off-court
← Break(ing) Point: Reacting to Karorenagate