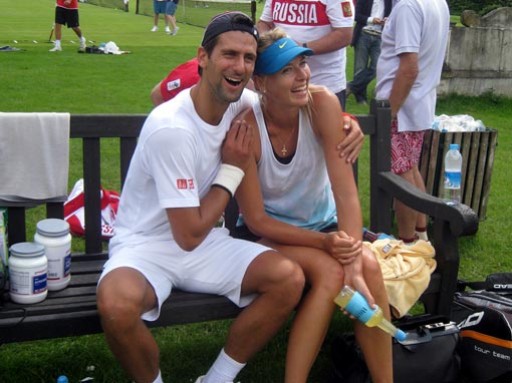 Last week, Novak Djokovic and Maria Sharapova each posted pictures of themselves while filming their new Head commercial. As per yushe, when these two join forces the result is usually a copious amount of laughs, sarcasm, banter and even a bit of flirting. Though Djokovic jokingly stated that Sharapova didn’t “take it easy” on him during their training, he didn’t quite elaborate on the complete emasculation that took place on the lawns of Stoke Park. Sadly for Djokovic, sovsport (check out the fully translated great write-up here.) was there to expose the Serb for the world to see.

- What is this Serbian guy doing here? - I ask Maria.
- Ha, he just lost his number 1 spot after Wimbledon and wants to train with me to increase his level of play, - Maria laughs but adds seriously: - We will have a photoshoot together and Novak came earlier to train a bit.

- When was last time you played on grass? - Maria laughs after Novak’s first bad shot.
- Haven’t played since Wimbledon - Novak shouts from the other side of the court.
- It’s very, very obvious - answers Maria while embarrassing Novak with her killer forehand cross.
And Novak begins to play with all passion and training quickly transforms into a real match with heav,y raging shots. There is absolute silence around, because the entire Russian team stopped training to watch the breathtaking match.
- I know you girls like all these slices - jokes Novak while running up to the ball. - But we deal with it just like this!
Novak hits ball heavily to the other side but Maria answers with lightning shot. Novak artistically falls down, showing all his disappointment.
- OMG, that was cool… - Maria’s hitting partner Vladimir Volthckov seems still shocked.
- Ha! - laughs Maria as she walks to her bench.

Ouch. No one tell Gilles Simon.

Like
One blogger likes this.
ATP Off Court, Maria Sharapova, Novak Djokovic, WTA off-court
← Believe It Or Not, Nadal’s Withdrawal Doesn’t Signal The End Of The World

One Response to Breaking: Scientific Proof That Maria Sharapova Is Better Than Novak Djokovic