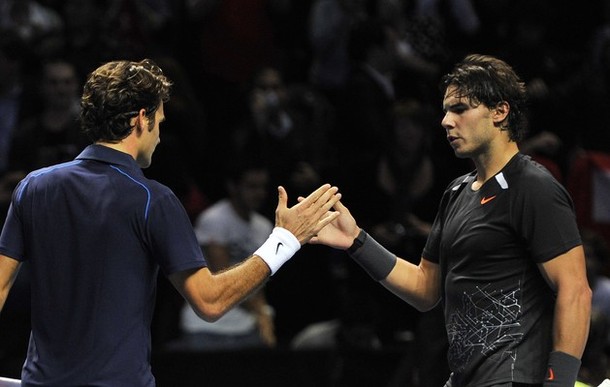 Tonight at the 02 Arena saw a slightly anticlimatic finish to the long-awaited rematch between Roger Federer and Rafael Nadal, with Federer steamrolling the Spaniard, easing through 6-3 6-0 in an hour.

Roger? Majestic.
The bipolar opinions on Roger Federer’s form in 2011 have really been something else. After his various uncharacteristic losses this year, many have been quick to bring up his age, suggesting that he’s over the hill and ready to retire. And after great victories like the Roland Garros semifinal, naturally it’s back to serenading him as the GOAT who never left.

Of course, today saw another one of the latter performances - a stunning victory from Federer and his most one-sided win over Nadal ever. He initially looked nervous, but soon those nerves transformed into the flawless attacking tennis we’ve seen time and time again from him as he blasted laser-like winner after winner. However, instead of just jumping on and off the bandwagon, people need to realise that Federer is still more than capable of producing spellbinding displays like tonight’s victory, his age just means that they’re simply fewer and further between.

This victory puts him into the semifinal before anyone else, and judging by all performances to date, leaves him at least a mile ahead of the rest of the field.

Rafa… helpless?
Watching Nadal this year has been an experience void of any excitement joy or intrigue. You’re right, it’s odd to say that after a year which saw him capture a Grand Slam, two slam finals plus six masters finals including one victory, but it’s also the truth.

Seemingly every time he has come up against a quality player in good form, he has almost inevitably lost, and often heavily. And it’s not just that he’s losing the matches, it’s that he seems helpless. Victory seems impossible. You look at Federer when he’s down and regardless of the score, he is always a handful of big and flashy forehands from turning it around. It’s a similar story with Djokovic - just a couple of clutch backhands and returns that clip the very back of the baseline and he’s back in it. And even Murray is more than capable flattening out his strokes and unleashing some bullets to save himself in the most tense moments.

But Nadal? None of that this year. So often when he has been down, regardless of how much mental strength he posesses, it’s clear to all that there’s no way back. The issue isn’t simply a case of him being too passive - even today as he sunk further and further under Federer’s wrath, he was visibly attempting to be more aggressive and looking to control points. It just wasn’t happening for him. The result was always either an error off an over-zealous attempt or else Federer (similar to Murray in Tokyo and Djokovic in the first half of 2011) easily fending off Rafa’s desperate offense before effortlessly pulling his own trigger to find both the line and a winner, leaving Nadal humiliated and red-faced.

His tactics are certainly part of the issue, with so many players clearly finally finding ways to counter the ol’ heavy topspin to backhand tactic which has served Nadal so well over the years. But Nadal’s game in itself is also clearly having big problems. Is it because the courts are ironically too slow for Nadal, the hard surface taking the edge off his topspin and the lack of speed making it tougher for him to hit through the courts? Or is it simply mental? Only he knows.