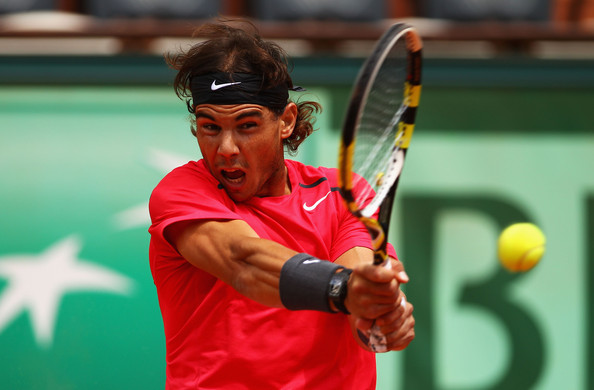 I wanted my comeback post to be about sunshine and butterflies, but instead - sigh - we’re back to that age-old grunting debate. I try to bite my tongue and stay away from the most ridiculous “issue” in tennis, but it just keeps on pullin’ me back in. Today the culprit is, amazingly, the WTA itself. After months and even years of (rightfully) placing fingers in ears and humming the grunting criticism away, the tour has finally caved in and is the advanced stages of bringing in new sanctions which will arm WTA umpires with an official ‘grunt-o-meter’ and the ability to sanction and penalize the noisiest players.

“It’s time for us to drive excessive grunting out of the game for future generations,” WTA chairman and chief executive Stacey Allaster said.

The umbrella scenario, unanimously green-lighted this month at Roland Garros in Paris by representatives of the four majors, the International Tennis Federation and the WTA players’ council, would include:

• The development of a handheld device — a kind of Hawk-Eye for noise — for umpires to objectively measure on-court grunting levels.

• A new rule setting acceptable and non-acceptable noise levels based on acoustical data gathering and analysis.

• Education at large tennis academies, national development programs and at all levels of junior and lower-tier professional events.

Honestly, I don’t blame them. What has, on some level, always been a topic of interest and satire in the (mainly British) media, over the past few years has transformed into an unequivocal PR dis-ah-stuh. Seemingly every day a new article is erected, damning the prominent grunters to eternal hell. Meanwhile, comment sections are filled with truly heartwrenching stories by people “forced” to change the channel and/or put their televisions on mute (whatever happened to just turning the volume down a few bars, eh?) due to those evil, godforsaken grunters. So sad.

Even so, I am and continue to be amazed by this entire situation. Just a few weeks ago, we were watching the mens Roland Garros final as Nadal and Djokovic produced noises similar to that of a male getting continually smashed by a baseball bat, you know, down there… Did anyone speak out against them? Nuh-uh. Just a few days earlier, Andy Murray and David Ferrer were doing exactly the same. Did anyone complain there? Err, no. Thus, should this project go ahead, in a few years we will be watching as female players are restricted and penalized for the noise they make, while some of the most prominent male players continue to soar well over those restrictions without so much as a batted eyelid. To me, that is maybe just a little bit problematic. Just a tiny bit.

Of course, many identify pitch (you know, like, different genetics) as the distinction between male and female grunting. That’s fair enough from a subjective preference, but noise is noise and if Maria Sharapova and Victoria Azarenka are supposedly cheating as has been so vehemently accused, then in reality Rafael Nadal is a cheat, Novak Djokovic is a cheat, Andy Murray is a cheat, David Ferrer is a cheat and so are the hundreds of other ATP players (and, believe me, there are hundreds) who routinely shout their heads off when making contact with the ball. But hey, don’t let facts get in the way of anything.