WTFs: Rafa Through To The Semis, Tries To Beat Up Some Officials En-Route

Drama, drama, drama. Rafael Nadal consolidated his place today at the top of Group A by defeating Tomas Berdych in straight sets and moving into the semifinals unbeaten. The first set saw some exciting tennis from both players as they went toe to toe, and for an hour nothing could separate them. Tomas finally made his move at 6-5* - holding and then stealing the first two points on Rafa’s serve… and then it happened.

It’s so typical that this is the exact time I decided to momentarily close the livestream window. As I put it back on, all I saw was Rafa yelling his head off at umpire Carlos Bernardes, and looking like he was about to drag Bernardes off his chair and start fighting him then and there. OK, maybe that’s a slight exaggeration, but it was probably the most animated and categorically pissed off Rafa has ever been on a tennis court. He clearly channeled all of that anger into his tennis as he took his game to the next level, recovering to take that game and then fighting his way to the set, smacking down forehands, backhands and serves alike.

By the second set Tomas had clearly lost heart and confidence, and it was just about finishing the job. And that’s what he did, closing out the match 7-6 6-1. This win means that he will definitely be meeting Andy Murray in the semis tomorrow - definitely looking forward to that.

Reger Federer downed Tomas Berdych in a dramatic three-set match on Friday. The 16-time-Grand Slam Champion launched a shocking comeback, recovering from 3-5 down in the final set to eventually steal the match 7-5 in the tiebreaker. 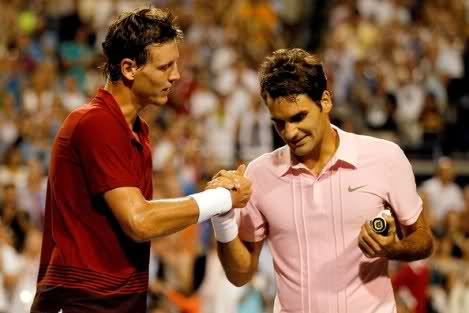 For Federer this is a huge win. Federer had already lost to Berdych twice this year - at Miami and of course Wimbledon. Since winning the Australian Open in January he has failed to win any title, even losing in the two ATP 250 events he entered. Federer was still far from his best for most of the match, shanking mid-court balls and allowing Berdych to tee off on the important points, but he showed great resolve to fight back and raise his level at the very end. It will be a massive confidence boost to him and it will be interesting to see whether he will be able to play much more freely (presumably) against Novak Djokovic tomorrow.

For Berdych it won’t be a massive setback. He definitely did bottle it when serving for the match, missing a number of mid court balls by huge margins, but he is still looking good moving towards the US Open. After all, he can always comfort himself with the fact that he defeated Federer at Wimbledon! He really is establishing himself as one of, if not the cleanest ballstrikers on tour. The sound the ball makes on his strings is absolute perfection and technically he is so solid. He will undoubtedly continue to move up and there is no doubt that he is in with a chance at clinching a top 5 ranking if he continues to play at such a high level. He is seeded to meet Nadal in the quarterfinals at Cincinnati, so expect more fireworks there.

Also have to shout out to the Toronto crowd. By the end they were cheering Berdych’s faults and unforced errors, talking as he served and just in general being absolutely classless. He should have taken a leaf out of Maria Kirilenko’s book

Should Schedulers Be Fairer To The Top Players?

After Tomas Berdych’s loss to Xavier Malisse yesterday, The Daily Forehand reported that the number one seed was less than complimentary about the organisation of the Washington tournament in his presser. The top seed scolded the schedulers for the fact that he was given less than a 12 hour turnaround between his three-set evening third round match and his quarterfinal match the next day.

Though many may may say that he was simply making excuses, he really does have a valid point. At most tournaments on both the ATP and WTA tours, if a match is stopped by bad light then it is automatically the second match match on the next day to give the players an opporunity to rest. Regardless of whether they had played only one game that night or the match was one game away from finishing, the players are given that privilege. This makes the Washington organisers look even more foolish as it wasn’t even a case of his night match being suspended - he was forced to play in two separate three-set matches in that period.

It was a similar story for Maria Sharapova last week when, after defeating Agnieszka Radwanska in the semi-finals of the Bank Of The West Classic in three sets, she too was forced to play her final against Victoria Azarenka the next day at noon. Sharapova was a shadow of herself and by the second set she was clearly drained, winning one solitary game and losing the last ten points of the match. Unlike Berdych however, Sharapova refused to use it as an excuse and stated that it is simply a consequence of being the tournament’s highest-profile player. 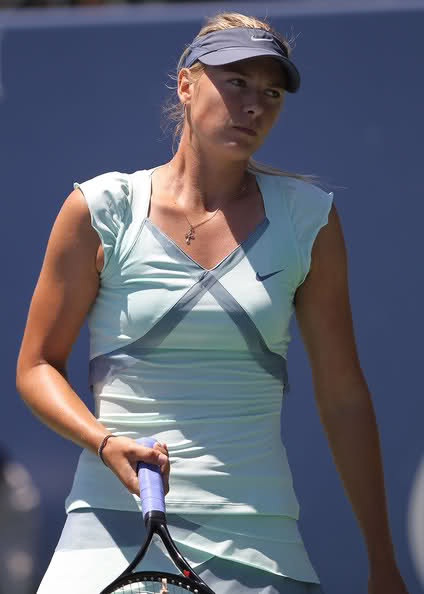 But is it? The best players shouldn’t be punished for simply being better than the rest of the field. Plus, it isn’t as if immediately after the match, the players can fall asleep for twelve hours and then appear on court the next day. So much goes on behind the scenes between matches; from speaking to the media to practising before and after matches.

I think it shows a lack of respect to the top players and it does give the edge to their opponents, robbing the top players of sleep as well as proper preparation time. However, things are only going to change if the players speak up directly to the organisers and make their concerns known. Start a revolution!