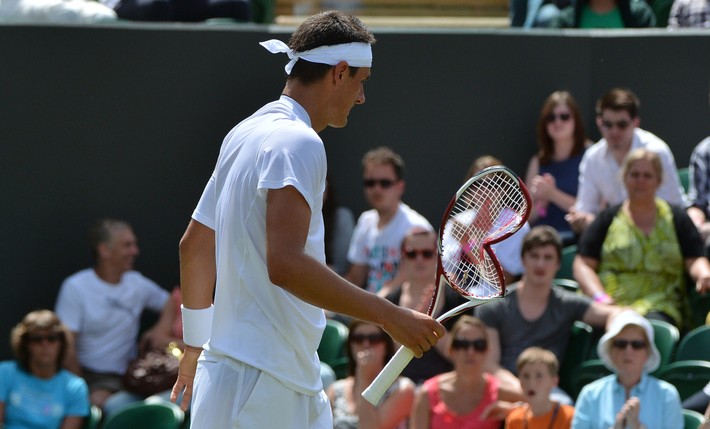 The tennis tour we enduringly follow is often, ironically, so little about the actual tennis. The gruelling, demanding and overly pressured nature of professional tennis demands character, reveals character and builds character. Only a select few come innately equipped with a hybrid of the required mental, physical and tennis qualities needed to ease their way to the summit of professional tennis. For the rest, the tour itself moulds them - soul-destroying losses come before gleeful wins, humbling lessons are received before the tables are turned. It’s all a process, a vital one.

Why the hell am I babbling on about nothing in particular, I hear you ask? Well, earlier this week the tour’s resident “wundakid” Bernard Tomic was destroyed by Benoit Paire in the lowly Gstaad ATP 250, receiving a bagel and managing only four games in total. A week earlier he was brushed aside in straights by an out of sorts Thomaz Bellucci and the tournament before saw him bounced out of Wimbledon - the scene of last year’s heroics - by grass novice David Goffin in four sets.

It was the Wimbledon loss that most interested me, or, rather, his reaction to the loss. Unlike the vast majority of players who offer the usual generic answers after a bad loss, Tomic was conversely candid when exploring the reasons for his defeat, blaming his lack of effort for his poor form, evidently assuming his talent would be enough. I was shocked. Not shocked at the mere omission of him not trying hard enough (in the timeless and eloquent words of Maria Sharapova; duhhhh), rather the combined knowledge that Tomic is notorious for his amusingly lofty ambitions, that he’s falling so painfully short of those amusingly lofty ambitions and that he evidently has a crystal clear understanding of exactly why he’s falling so short of those amusingly lofty ambitions yet hasn’t made any attempt to rectify it? I shouldn’t be, but again, I was shocked.

It all comes back to my original point. Relative to practically every other player, Tomic has barely had to lift a finger during his short career. He achieved immense success in juniors solely down to his natural talents - slicing, dicing and reading opponents like a book without bothering to properly construct points. The success in juniors brought hype and self-hype which prompted tournament directors to toss a never-ending stream of wildcards in his direction (he received 10 wildcards in his first 15 tournaments of 2011) which were treated with arrogant indifference by Tomic as he only put his full efforts into the main events.

Finally, it’s all coming back to haunt him. His talent has fallen in place only a handful of times over the past eighteen months, while for the most part the ATP tour has been quite the culture shock. His weaknesses are being effortlessly exposed at all levels and the tactics he utilized so much in juniors are unsurprisingly ineffective against professional tennis players. He has crashed straight into a glass ceiling and, at least for now, hasn’t armed himself with the knowledge of how to break through it.

The good news for Tomic is that he’s certainly talented and, of course, still extremely young with plenty of time to learn and appreciate the art of hard work and improve both the mental and physical aspects of his tennis that are clearly lacking. But looking just thirteen spots below him at the sorry state of Donald Young’s tennis career, he would be well-advised to hurry.

Like
Be the first to like this.
ATP, Bernard Tomic, Let's Talk About
← From The Vault: Jennifer Capriati Quotable Quotes: Grigor Dimitrov Still Ain’t Got Time For Federer comparisons. →

One Response to Let’s Talk About: Bernard Tomic