Venus Still On Track For Melbourne 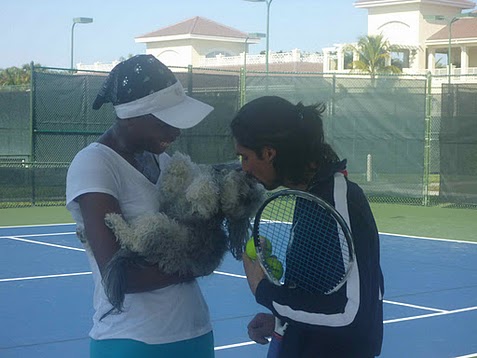 Despite having not made any confirmation of her participation at this year’s Australian Open, it appears that Venus Williams has been putting in the hard yards back in Florida. And according to French Coach Didier Lanne, who had a one-off practice session with the legend yesterday, it’s going pretty well.

Ballou had a great workout this morning with Venus Williams! And thanks to Charly (former player Charles Eduardo Maria), who is coaching the champion during her preparation for the Australian Open, they asked us to do the morning practice with them!

Under the watchful eye of Olivier Patience, who also lives with Charlie during his tour of tournaments, but also the idol of all “RV” and Harold, the dog from Venus! We spent a beautiful morning hit in sunny Florida!

Here are some pictures which the great atmosphere but also the seriousness of the training this morning.

At this point it’s impossible to tell whether or not Venus will be making the trip to Melbourne. According to the Australians, she hasn’t made any indication about whether or not she will be participating, but this tells a more reassuring story. Needless to say, she’ll have to make a decision soon.

Like
Be the first to like this post.
Australian Open, Venus Williams
← Marion Bartoli Double Bagels Gajdosova, Feels Bad About It From The Vault: THAT 2003 Australian Open Quarterfinal →