Gilles Simon Wins Hamburg - BUT WHAT DOES THIS MEAN? 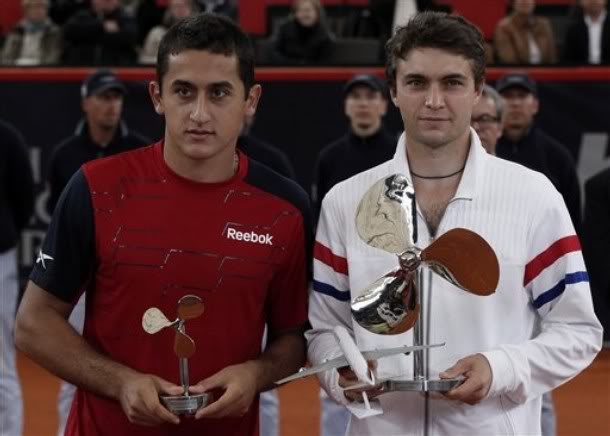 1. He‚Äôs Back
It has been a long road back from injury for Gilles Simon. Though he was officially out for around four months last year with his knee injury, in reality the injury in both his knees and consequent surgery set him back practically a year, with the knees bothering him from 2009 Wimbledon to the grass season a year later. But finally he is back, and he took a huge step forward this week by beating Monfils, Youzhny and Almagro back to back to back to take home the biggest title of his career at the Hamburg ATP 500.

2. Top eight beckons
Looking forward to the rest of the season, Gilles‚Äô prospects couldn‚Äôt be any better. With this win he‚Äôll be ranked 11th on Monday, and the fact remains that the claycourts of Hamburg is traditionally his worst surface, while the upcoming US decoturf hardcourts followed by the indoor courts are where he plays by far his very best tennis. That coupled with the relative average form of practically every player from #7 and under, and you have to think that it will be a huge disappointment if Simon doesn‚Äôt reach the top ten by the end of the year.

3. Call him pusher at your own peril
I still find it silly that people continue to refer to him as a “pusher”. Sure, his game isn‚Äôt even close to being as obviously brilliant as his rival countrymen or many of the other top ten players, but so much thought goes into his tennis. This was no more evident than in the final against the in-form Almagro. The key to the match was the way he was able to keep Almagro guessing and unable to anticipate well enough, alternating between keeping the ball deep, flicking the ball so low and short that it barely creeped over the net, unleashing on random balls and then making a handful of unexpected forays to the net for good measure. This week Almagro has been blasting through the field, with players such as Kohlschreiber and Verdasco giving him so much power to redirect, but today he was forced to create his own power, but he simply couldn‚Äôt. Thus that purposeful and extravagant ballstriking was replaces with tentative and passive play, usually enabling Gilles to work the rallies - eventually outmanouvring his Spanish opponent and winning the point.

4. Little Timote√© is here to stay
After the match Gilles gave his son Timothee a cute little high-five before crediting his son as being his lucky talisman; “My son was here for the second time, this is the second time I‚Äôve won,”

One Response to Gilles Simon Wins Hamburg - BUT WHAT DOES THIS MEAN?